The research in this blog post was completed as a part of the University of Wisconsin–Madison’s Public History Project. The three-year project aims to reckon with the university’s history of racism, exclusion, and discrimination. The project will culminate in an exhibit in the fall of 2021, an interactive online website, and curricular tools. By sharing research before the opening of the exhibit, we hope to begin conversations about the history of UW–Madison and discuss how we can all work towards building a more equitable campus community. The nature of historical research is that it will always be incomplete. It is impossible for us to know everything that happened in the past. Therefore, the research in this post is imperfect, as all history is. Our student researchers have completed the research below with all of the historical documents available to them at the time of publication. There will be alternative perspectives to those detailed below. We believe that the discussions that arise out of these differing perspectives are an integral part of the process of reckoning with our history. We welcome responses and discussion. Responses submitted by email will be posted in a response and discussion post within one week after the original publication date. Responses with vulgar or offensive language will not be posted.

Content Warning: The UW–Madison Public History Project blog aims to provide a space where our community can begin the difficult work of reckoning with our history. Some of the content and language in this blog post is problematic, offensive, and disturbing. 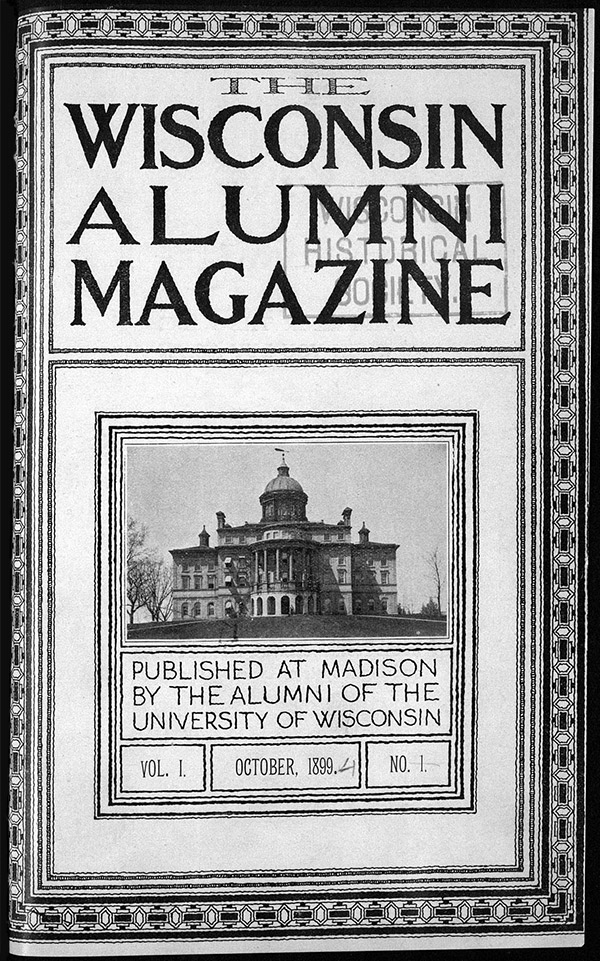 Founded in 1899 and continuing publication today under the title On Wisconsin, the Wisconsin Alumni Magazine sprung from a desire to keep former students at the University of Wisconsin–Madison appraised of campus happenings and to encourage their ongoing involvement in university affairs.  From its inception, the magazine sought to both reflect and reinforce the institution’s self-image as a model Progressive Era institution. A cursory reading through the Wisconsin Alumni Magazine reveals many self-congratulatory articles that paint the University of Wisconsin as inclusive and forward-thinking school, and its students as motivated by a sense of social responsibility. Despite the real strides that the university had made in extending education to people of color and women by 1900, however, the Wisconsin Alumni Magazine reinforced harmful stereotypes of a wide range of marginalized people who were present in the campus community.

The Wisconsin Alumni Magazine’s second-ever issue includes a reprint of a poem entitled “Obijibjaw,” which was originally published in a Wisconsin students’ magazine in 1857.[1]  The piece plays upon the association of Native Americans with alcoholism, and recounts the demise of the titular character in a whiskey-fueled brawl. The protagonist is not a mythical figure relegated to the far west, but one living on the land that became the city of Madison. The poem, which the Wisconsin Alumni Magazine described as the “best” verse from the 1857 magazine, begins

One day, Obijibjaw drank
Too much whiskey by a jugfull,
And the meanest kind at that.
He got boosey, he got tight,
He got mellow, he got drunk,
He got a most tremendous big brick
In his hat – the hat of Obijibjaw.

The poem’s first verse includes a startling reversal of responsibility for the dispossession of Native American lands. Settler colonialism plays no role in driving “Obijibjaw” from his home. Instead, the Indian’s implied moral weakness led to his death and, presumably, the vacancy of the land surrounding Lakes Mendota and Monona. The remainder of the poem recounts “Obijibjaw’s” conflict with another Indian man that led to the deadly brawl, employing mocking diction and stilted structure to depict its subject as crude and, perhaps, to justify the construction of an institution of higher education on his former homeland. The magazine’s decision to reprint the poem and single it out for praise forty-two years after its initial publication further suggest the durability of this particular form of prejudice at the University of Wisconsin throughout the late nineteenth century, and the attempts of alumni to perpetuate it.

The contributions of alumnus D.K. Tenney highlight the tension between Wisconsin’s egalitarian aspirations and its pervasive culture of discrimination. Tenney, who attended the university in the 1850s, recounted a prank he committed which drew the ire of the faculty.  He viewed their attempt to expel him, however, as entirely disproportionate to the infraction. As he explained it, “I had been attending the institution for three years, on a charity scholarship, while the other boys had to put up their money. I fancied that the faculty wanted to get rid of me because I was poor and not contributing a cent toward the payment of their meagre salaries. Necessarily, I was wrathy at the infliction of so severe a penalty for so small an offense.”[2]  His classmates evidently agreed that Tenney was the victim of class-based discrimination. In a show of solidarity, his fellow students announced they would all leave the university if Tenney was expelled, and the faculty relented.

If this episode shows a welcoming side to Wisconsin’s campus community, another of Tenney’s articles reveals a much darker aspect of early Wisconsin student life. Tenney described a new student as “tall, slim and slender, with countenance as fierce as that of an Indian, and with a head of curly hair, most remarkable for a white man. He was of English birth and as poor as Lazarus, but regarded his woolly hair as sufficient capital for any undertaking.”[3]  This student, whom Tenney implies was mixed-race, became the object of a series of cruel mockeries and pranks throughout his time at the university. Made fun of for his apparently bad poetry and ridiculed for his support of women’s suffrage, the student endured months of torment until he experienced one last terrifying indignity. As Tenney recounted,

And still our poet and his woolly locks continued to flourish. One night, when he was asleep, some mischievous fellows, masked, got quietly into his room, seized him in his bed, sheared off all his beautiful curls and completely daubed his head with mucilage. Next morning, he went up to the chancellor’s office, stood before him bareheaded, and said:

‘Chancellor, see there!’
‘Yes,’ said the chancellor, ‘that is a great improvement over your old style.’
That chancelloric decree broke the poet’s heart. He left the university and returned no more forever.[4]

Perhaps more disturbing than the toxic student culture and lack of faculty support that led to this student’s experience is Tenney’s obvious enjoyment he takes in recounting the story in 1902. No part of this story is a cause for shame, and, alarmingly, an editorial board read through, approved of, and distributed this story. As the Wisconsin Alumni Magazine insisted at the end of each issue, the magazine was intended for distribution among all former students, regardless of whether or not they had graduated. In principle, then, the publication counted the ridiculed student among its target readership, although it is hardly likely he would have had any desire to remain connected with the university. Most damagingly, the publication of this story served to condone discrimination and abuse of students on campus, celebrating Tenney and his classmates’ behavior in the 1850s and implying that similar activities in 1902 would be equally well received.

The publication of the articles mentioned above should not be surprising, given how prevalent articles promoting scientific racism were throughout the early years of the Wisconsin Alumni Magazine. The magazine served as a platform for direct articulations of racial determinism, such as those found in Charles Francis Adams’s keynote address at the dedication of the Wisconsin Historical Society.[5]  In his speech, Adams credited Wisconsin’s success to its immigrants of Anglo-Saxon, Germanic, and Scandinavian stock, and erases Wisconsinites of other backgrounds. Adams presented Social Darwinism at its baldest, asserting that “In the history of Wisconsin I shall seek to find… evidence of the truth of the great law of natural selection as applied also to man.”[6]  In Wisconsin’s history, Adams identified its Anglo-Saxon, Germanic, and Scandinavian inhabitants as “the masterful race – the master of its own destiny, it is master of the destiny of others.”[7]  In Adams’s mind, these people were “the more enterprising, adventurous, and energetic of three of the most thoroughly virile and, withal, moral and intellectual branches of the human family… Tough of fiber and tenacious in principle, the mixed descendants from those races were well calculated to illustrate the operation of a natural law.”[8]  Wisconsin’s place at the forefront of “human evolution,” then, was due to its racial majority’s inherent traits, not universal principles. The state and university could only follow the maxim “Forward” because its population primarily descended from western and northern Europeans.

The Wisconsin Alumni Magazine illustrates the ways in which alumni affairs can serve to reinforce or perpetuate damaging aspects of campus culture. While the rapid turnover of university students would suggest that they would have relatively short institutional memories, this publication demonstrates that alumni still enjoy a powerful platform to define the limits of inclusion for their alma mater’s community long after they graduate. Above are only three examples of discriminatory articles from the Wisconsin Alumni Magazine; unfortunately, such themes were pervasive throughout the early twentieth century. Moving forward, alumni publications need to be cognizant of their power to shape notions of belonging in the broader University of Wisconsin community.

We at the Wisconsin Foundation and Alumni Association would like to thank the Public History Project and Mike Kaelin in particular for researching the UW’s past. It’s distressing to see how much attitudes of bias were accepted and even promoted on campus. The article illustrates how much things have changed in a century. The items cited would never appear in today’s On Wisconsin, nor in any issue published in recent decades. I’m proud of what On Wisconsin is today — of its honest and thoughtful look at the university and its alumni.

The UW has come a long way in the last 120 years, as has American society in general. In that time, the university has given us the Wisconsin Idea and cemented Sifting and Winnowing as its guiding principle. We at WFAA are proud to celebrate UW–Madison and its ideals.

Individuals are not often taught to think of themselves as sources of historical knowledge, but they are. Individuals hold intimate knowledge of their campus, their neighborhoods, and their communities. That is why we want to hear from you. We believe that this project will be the most successful when it deeply engages all of those in our community. If you have a story to share, an event you think should be researched, or a person you think has been overlooked, please contact us. publichistoryproject@wisc.edu