Since the late 1960s, Chicanx activists, academics, and students have been fighting for the legitimacy of Chicano Studies as a discipline with a rightful place as a department at the University of Wisconsin–Madison. Following a four-month protest and successful state lobbying effort in 1975, Chicanx students and activists amended the university’s budget to create the Chican@ Latin@ Studies program. Caught in limbo between activist ideologies and the restrictions of an academic institution, Chicanx activists and academics fractured over how to get departmental status. Despite these circumstances and the infighting that erupted between Chicanx activists and academics, both parties helped Chicano Studies survive the 1980s and enabled future generations to grow the program. Today the fight for a department continues. 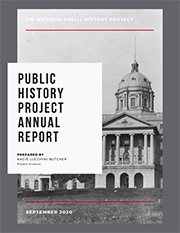 Since its launch in August of 2019, the UW–Madison Public History Project and its researchers have worked tirelessly to uncover and give voice to the histories of discrimination and resistance on campus. The project’s annual report showcases the work accomplished over the past calendar year including synopses of research completed by students, ways to engage with the project and its work, and a vision for the project’s final outcomes.

In the spring of 1988, a Black female UW–Madison athlete was violently attacked. While authorities denied it was a racially motivated attack, students, faculty and community leaders argued otherwise. But this was not the only attack on Black women to occur on campus or in the Madison community. Graduate student Angelica Euseary explores the history of racialized violence against Black women and asks the question — Are Black women safe at UW–Madison?

In October of 1968, an Afro-American and Race Relations Center opened at 929 University Avenue. Its mission was to “encourage Afro-American studies,” a new field at the time, and to sponsor events, such as “lectures, black theatre productions, art exhibits, [and] conferences on Afro-American art and culture.” The center quickly became a source of pride for students and, among administrators, proof that the Madison campus supported “programs of interest and relevance to Afro-Americans.” Less than five years later, however, on August 8, 1973, campus officials announced that the center would close, permanently.

Founded in 1899 and continuing publication today under the title On Wisconsin, the Wisconsin Alumni Magazine sprung from a desire to keep former students at the University of Wisconsin–Madison appraised of campus happenings and to encourage their ongoing involvement in university affairs. It also reinforced harmful stereotypes of a wide range of marginalized people who were present in the campus community.

“I’d like to take my place among you as your classmate,” UW law student Brigid McGuire announced to her civil procedure class on September 7, 1994, before revving up her circular power saw and cutting off a portion of her desk to make room for her motorized wheelchair. Amid applause, she added, “My hope for this action today is for this law school to get a carpenter in here and do the right thing.”

Tucked away on the 4th floor of Steenbock Library, you will find The University of Wisconsin–Madison Archives. This blocky, non-descript concrete building holds the history of UW–Madison — legacies of innovation, academic success, institutional organization, and community. Only a front desk and a friendly staff stand between you and the overwhelming collection of documents, materials, and objects that represent the whole history of this campus.

Well… maybe not the whole history.

If you have found your way over to this blog, you may be familiar with University of Wisconsin–Madison’s new Public History Project. If not, here are the basics. The project grew out of a campus study …